ELMAH ships with a module called ErrorTweetModule that was originally designed to post brief error notifications to a Twitter account. It only made sense, in fact, for a Twitter account where updates were locked away from public view. If the account had a following then those people would receive notifications as well.

ErrorTweetModule shipped with ELMAH before Twitter service disabled the use of Basic authentication. While ErrorTweetModule won’t work for Twitter anymore, it was developed general enough that you can still use it with custom or other notification services. It’s not by chance that the module was named ErrorTweetModule instead of ErrorTwitterModule; tweet, in this context, meaning a brief message or update. In this article, you will see how to use ErrorTweetModule to receive notification on an iPhone or an iPad without writing a single line of code!

ErrorTweetModule fundamentally takes an unhandled or signaled exception and turns it into an HTTP form post to any URL. Like most other modules in ELMAH, it can be configured with a few options. Out of the box, ErrorTweetModule is setup to post to Twitter such that all that was left to do in the past (while Twitter still supported Basic authentication) was configuring the user name and password of a Twitter account and one was good to go.

In its default state, the module is configured as if you had the following under elmah section group in your web.config:

Following is a breif explanation of the attributes:

Let’s see how configuring these attributes, you can use have ErrorTweetModule send you nearly real-time notifications to a device such as an iPhone or an iPad.

Prowl is a Growl-like application for iPhone and iPad. It sports a simple API using which one can emit notifications with HTTP POST and have them subequently deliviered to your device.

First, you will need to purchase the Prowl application for your device: 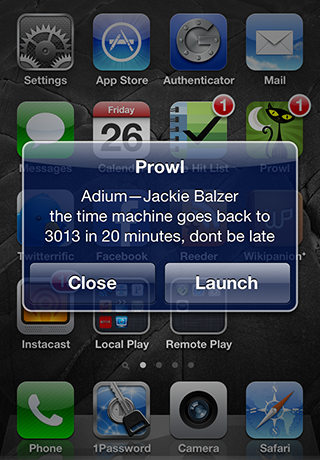 Next, register with prowlapp.com and once your account has been created and registration is complete, open the web.config of a web application already using ELMAH. Define the following section under the <sectionGroup> element for elmah:

Next, add the following section under the <elmah> section group:

Replace APIKEY in caps above with your Prowl API key. You may also want to replace example.com or other parts of the formFormat attribute to more meaningful values. See the Prowl third-party API for more details and the meaning of the various form fields.

You will then need to register the HTTP module by adding the following element in the <httpModules> section:

If you are using IIS 7 or later then you will need the following entry in the <modules> section:

That’s it! Next time you get an error, you should see a notification appear on your device, similar to screen captures below!

Note that you can also use error filtering together with ErrorTweetModule. Just make sure that ErrorTweetModule is registered before ErrorFilterModule in the modules section.

You can now imagine how you can use ErrorTweetModule to also send error notifications to a custom in-house service!